Stockholm close in on Scandinavian title after Oslo thriller 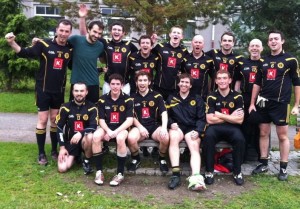 The Stockholm Gaels have one hand on the John Aherne Scandinavian trophy following a thrilling win over Oslo GAA in the Norwegian capital on Saturday June 30.

Having won the opening round of the championship on home turf, the reigning Scandinavian champions from Sweden travelled hoping to take a big step towards three in a row.

Summer in Scandinavia is a quiet time, but with Copenhagen and Malmö unable to travel and Gothenburg GAA weakened by the absence of key players, there was little or no room for error. Having narrowly defeated Oslo in the final of the previous round, one slip-up by the Gaels could have blown the championship wide open.

The opening game of the day between Oslo and Stockholm was a cagey affair with both sides failing to open a gap. Stockholm had a gilt-edged chance to get a grip on the game in the first half only for their forward to fire narrowly wide from a glorious position.

Stockholm eventually edged out the hosts 0-8 to 0-6 before taking on Gothenburg, who were strengthened by some replacements from the Oslo panel.

The club from the west coast shocked Stockholm with an early goal but they were unable to capitalise, and when Niall Balfe scored a goal for Stockholm he set in train a run of scores that gave Stockholm a comfortable victory and put them in the final.

Gothenburg weren’t helped by another set of forced changes as Stockholm’s subs populated their ranks for their group game against the hosts. That said, Gothenburg took their scores well and with a few of their more experienced hands at the tiller they would have caused a few more problems on the day.

With the ground thankfully drying out and the sun breaking through, the referee threw the ball up for what was a repeat of the final from the Stockholm tournament.

Oslo have improved immeasurably in the last two season and despite Stockholm slotting over an early point, the Norwegians hammered a goal to put themselves in the driving seat.

The rest of the half was hard-fought with Oslo pinging over some points to lead comfortably by four points at the half as Stockholm failed to convert their firepower into scores.

But despite losing Niall Scullion to a serious leg injury, the superior experience and fitness of the Swedes was to take its toll in the second half as they gradually eroded the Norwegian lead.

First establishing a platform, they took their chances calmly when offered and never forced the play, and with minutes to go they had drawn level with a tiring Oslo.

Stockholm finally broke the deadlock as a booming ball from halfback Brian Stokes was collected by Phil O’Connor, who played in Ciaran O’Reilly to fire home and put the reigning champions on the road to victory.

Keith Hearne then tagged on an insurance point to lead by 1-9 to 1-5, but were lucky to survive a late scare as Oslo desperately fought to get back in the game.

A high ball into the Stockholm square wasn’t dealt with and the Norwegians almost managed to turn it into the net before Stockholm somehow found a route to run it out of defence.

It was Oslo’s third tournament final defeat to Stockholm, who have now won seven of the last nine tournaments in the Nordic region.

But the gap to their rivals is closing all the time, and though they will be favourites to retain their title, they are unlikely to have it all their own way as a disappointed Oslo seek to lick their wounds and go one better in the next round in Malmö in August.

A great performance by all concerned- now let’s finish the job!