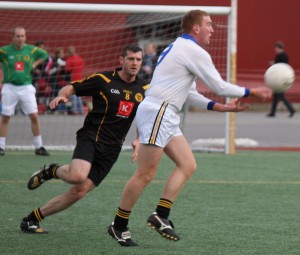 The old adage that goals win games held true once again as Niall Balfe’s United side beat Kennedy AB to claim the inaugural Ambassador Cup title in Stockholm on Sunday. Niall’s team netted four goals in a pulsating counter, with Kennedy’s only three-pointer coming from the boot of Brendan O’Driscoll, who along with James Guanci was appearing in his first GAA final of any sort. It finished 4-13 to 1-10 to Balfe United, who will receive their medals and trophy at a ceremony hosted by the Irish Ambassador later this month.

Liam Kennedy’s side weren’t helped by an injury to forward Colin Courtney, who went over on his left ankle early in the first half, but with both goalkeepers not afraid to move upfield with the ball, there was no shortage of attacking threats on either side.

Senior team captain Kevin Carroll was his usual industrious self, popping up all over the pitch in defence and attack for Kennedy. Despite only taking up the game a few short weeks ago, Guo Guodong was a constant threat with his speed and improvisational abilities in the Balfe frontline. 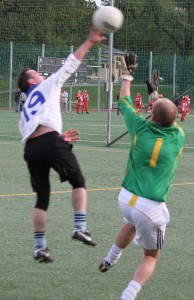 Mark Meegan beats Liam Ginnane to the punch for a vital goal.

Niall Balfe himself made a triumphant return from a dislocated shoulder to lead his side to victory, and they could even afford the luxury of  a missed penalty in the second half and still run out winners.

With Ragnar Almqvist in goal and Niall Scullion prompting attacks from the back, Mark Meegan popped up with several vital scores, including a fisted goal which put the final nail in the Kennedy coffin late in the second half.

The Swedish-Irish Society were also on hand to provide some colour for the occassion, and they kept younger family members entertained with hotdogs and soft drinks as the action went on on the pitch.

Thanks to all the players and coaches who took part in a fantastic tournament played in a great sporting spirit. A special word of gratitude to Jim Kelly and Phil Cahill, whose organisational and refereeing skills were key to making the six-week league such a big success.

Our attentions turn to Europe again next weekend, but rest assured the Ambassador Cup will be back soon with more teams and more players.