Defeat By The Danube But Gaels Aren’t Blue

The final weekend of the competitive season saw the Gaels depart Arlanda on Friday night for Budapest and the most daunting sporting challenge of the year – the Pan-European Gaelic Football Championship. A side weakened by injury and absence but strong on resolve and self-confidence touched down in Budapest determined to keep the club flag flying as long as was possible, and once again expectations were exceeded.

Drawn in a tough group, the Gaels faced the hosts first on Saturday morning, and a young Budapest side quickly put up a strong challenge. A speculative high ball dropped over Liam Ginnane in the Gaels goal to give the hosts the lead, but the Scandinavian champions weren’t about to lie down. Colin Courtney’s left boot has been the source of many scores this season but with his left ankle bruised and swollen, he used his right to fire home first time and pull the Gaels back into the game. A Mark O’Kane penalty then put the Gaels in the driving seat, spurring his team on to win 3-3 to 1-5 and get some hard-fought points on the board.

Luxembourg were next and another hard battle ensued. With no disrespect to anyone in Scandinavia, the European sides have a head start and their skill, experience and the depth of talent available to them was apparent throughout the day. But once again the Gaels weren’t to be undone, and with Mark O’Kane shackling the Lux dangerman in midfield and his friends Mark and Jarlath giving good account of themselves in the back line and in midfield, another victory was chalked up and qualification for the semis all but guaranteed.

Tactics talk from Liam before the throw-in

In an effort to protect tired limbs and conserve energy, the Stockholm pack underwent a serious reshuffle for the final group game against Paris, who handed the Gaels only their second defeat of the season. With Niall Scullion replacing Colin Courtney at full forward and the goalkeeping duties being handled by Mark O’Kane and Declan Graham, the French side quickly conquered midfield and built up a lead that Stockholm never threatened to peg back. Keith Hearne was given licence to roam the field breaking up attacks, and Stockholm’s Marathon man revelled in the task throughout the day. Fellow distance runner Karl Lambert was also forced to cover the ground, but as usual the Sundbyberg Express was on time, every time to snuff out the Paris efforts on goal.

Nigel O’Reilly covered virtually every position from the full back line up to half-forward and wasn’t found wanting in any of them, as Barry Quinn and Jim Kelly scrapped hard for ball against a tough half-back line. The pair did Longford and Carlow proud as they succeeded in setting up several scoring chances for the deep-lying foward Scullion, who finsihed them off in his usual stylish manner.

A long break caused by the late arrival of Guernsey to the tournament ensued and the Gaels, by now stiff-legged and sore from the constant stop-start games against Europe’s top sides, were starting to tire at the worst possible moment. Semi-final opponents Den Haag had a big bench to call on and with plenty of energy in reserve, they set about playing the same quick-passing, hard-running football that was a trademark of the Gaels earlier in the spring. Den Haag quickly built up a head of steam and threatened to run away with the tie, but the Gaels showed the same spirit that fuelled their march through Scandinavia and threw everything at the Dutch side in a final frenzied assault.

First Ken Feely ran all of forty yards before smashing home a brilliant solo goal, and Declan Graham’s fisted effort from a rebound looked to have set up a grandstand finale only for the referee to disallow it, inexplicably giving the Dutch a free out for a square ball. The final whistle a couple of minutes later came as something of a relief to the tired Gaels, who witnessed a cracking final between Belgium and Den Haag as the sun set over a chilly evening in Budapest.

All of Europe had been waiting to see the team that had burst onto the Scandinavian scene this year, and the Gaels didn’t disappoint – every team that met them had to battle hard for every yard against them. The Viking Gaels, our ladies team composed of Scandinavians from Copenhagen, Gothenburg and Stockholm, also put on some fantastic performances in their group games.

With not a single Irish-born players in their ranks the Scandinavian girls were up against it, but they frightened the lives out of many of their opponents with their excellent technique and never-say-die attitude, and with a few more breaks from the referee and a more selfish attitude in front of goal they could have caused at least two major upsets in Europe’s premiere ladies competition. As the day wore on their tactical play improved greatly and it will be a far more confident team that returns to this stage next year as they attempt to push on in Europe.

With no flight until early Monday morning, all that was left was to enjoy the hospitality of one of Europe’s most beautiful cities. A wonderful banquet was organised on Saturday night by the host club, and the following afternoon was spent relaxing and recovering in a traditional Hungarian steam bath before a spot of sight-seeing and an end-of-season dinner at the Rose Restaurant close the the Gaels hotel.

For the first time, the Gaels went to a tournament, lost two games and didn’t make it to the final, but there was no shame in any of these defeats. Much as we learned the lessons of Copenhagen, now we know what awaits us on our travels and we will be all the better prepared for next season. 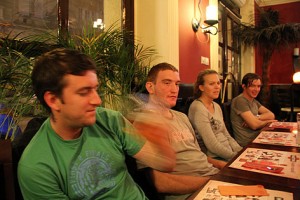 Courtney's left arm- almost as quick as his left peg...

Our thanks to our hosts Budapest, and to our sporting opponents from Paris, Luxembourg and Den Haag on the day. An even bigger thank-you goes to Jim Kelly and Niall Balfe, with the former documenting the day’s proceedings, contributing a helping hand on the pitch and updating the fans at home and abroad with news of our progress, whilst Niall, fresh from his side’s victory in the Ambassador Cup, played the manager’s role to perfection, keeping everything running smoothly on the day.

Mark O’Kane’s reinforcements from Derry deserve a special mention for taking the time to come over for the weekend to help out on the playing front, but once again it was our own players who represented the club in the fantasic sporting manner to which we all aspire – with skill, flair and sportsmanship, the Stockholm Gaels took another step towards a bright future in European Gaelic Football. Be part of it.