The 2010 season came to a close and the planning for 2011 started in earnest with a game of hurling at Östermalms IP and a prize-giving ceremony at the new Irish Embassy in Stockholm.

The Gaels prepare for the first hurling clash in 15 years in the city.

As the winter chill began to bite on October 30, around twenty hardy souls took to the field with their camáns for the first game of hurling in Stockholm for almost 15 years.

Club sponsor Liam Kennedy, who took part in the last hurling game to take place in the Swedish capital all those years ago, threw in the ball to start the new era of hurling and despite some wonderful scores from distance, the Scandinavian Select eventually beat the Stockholm Gaels representatives, powered by a couple of quick goals at the start of the second half.

From there it was on to Hovslagargatan 5, where Ireland’s Ambassador to Sweden, Mr Donal Hamill, welcomed the Gaels for a prize-giving reception. The Ambassador first presented the medals for the recently-completed Ambassador Cup before turning his attention to the team that won the Scandinavian championship.

In a break with tradition, club captain Kevin Carroll stepped aside as the John Ahearn trophy was presented to Karl Lambert as the trophy is named in tribute to Karl’s friend John, who tragically passed away on a visit to Stockholm to celebrate St. Patricks Day some years ago. Specially commissioned by the club, it is hoped that the John Ahearn trophy will be comepeted for every year in Scandinavia, subject to agreement from the other clubs in the region

A huge thank you to the Ambassador and to Embassy Second Secretary Ragnar Almqvist for organising the event, to the Ambassador’s wife Bernadette who as always was a wonderful hostess, and to the staff at the Embassy. 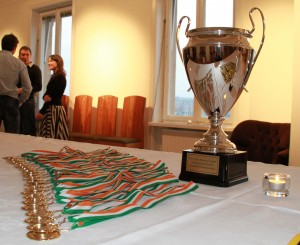 The John Ahearn Trophy, on display at the new Irish Embassy in Stockholm.

In another great coup for the Gaels, the European County Board will hold their annual congress in Stockholm on the first weekend in December- more details about activities around this great event coming soon.

Planning for the 2011 season has already started, and with the Embassy behind us and a great pool of talent at our disposal on and off the pitch, next year will be another great year for the Stockholm Gaels.